Planning for a Childs future in terms of education is always in the top priority whenever you ask parents, education is that framework which will secure a Childs future and that’s why the emphasis on quality education is a set benchmark with parents who are willing to invest in their Childs education. Now talking about a Childs future, the basic research as a parent you would do is understand what does your child aspiration is and what does he want to become, I know that children these days get easily inspired after watching certain things  and it keeps on changing multiple times, however if we consider cost of education in any field today compared to say 1 or 2 decades, you will be surprised to know the inflation rate in education sector has been soaring more than 300%, now that can set any parent on the back seat considering how to plan financial with such high inflation rate for Childs future.

The trend in India as we might have observed from our parents, their friends, neighborhood and society is that firstly education funds are not always the set priority and its heavily dependent upon funds from FD’s (fix deposits), inheritance funds left by grandparent for their grand children and in many cases which is common these days is education loans which I feel is more of a burden which creates pressure for both parent and child.

I would give a fair share to my parents for providing me quality education, they definitely understood that education is a must for a brighter future and kept saving from the very beginning, however the saving were not enough to fulfill the complete fees and we had to opt for other resources however the intend was always there.

We are now an educated bunch of youth developing in India and we sure know the importance of Education but what we lack is the understanding somewhere about what could be a healthy and profound solution of saving for our child’s education? Mutual funds! How does that sound? Yes, with the ever growing and developing market, mutual funds investment has that right algorithm to fight the mighty inflation, as the investment grows and evolves with market at a brisk consistent rate. 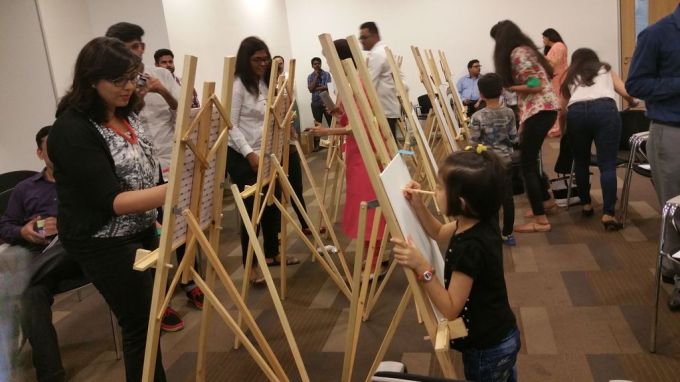 Lately an initiative was conducted in many cities of India at Crossword and KidZania on-ground activation for NEW INVESTOR EDUCATION AWARENESS CAMPAIGN – #DoYourHomework by Axis Mutual Fund to better understand the parent and child relation in terms of aspiration sync, apart from that information regarding parent’s ideas and opinion on education savings for their children were also taken as a crucial parameter. 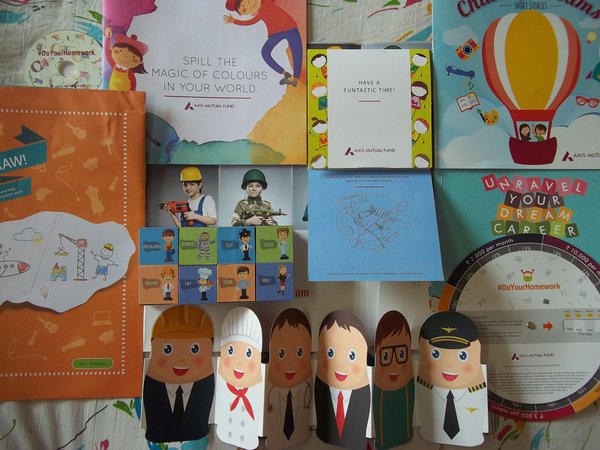 Considering the data and research parameter from the campaign, Axis Mutual Fund came up with some healthy pointers and useful details in their micro-site do your Homework, if you browse through you will come across a custom made market ready calculator that will help you plan your Childs future, apart from that you can also download The Homework App, a space that will make you think and get guidelines on how mutual funds can be beneficial if investment is started from a early age of the child and multiple market aspects as well. 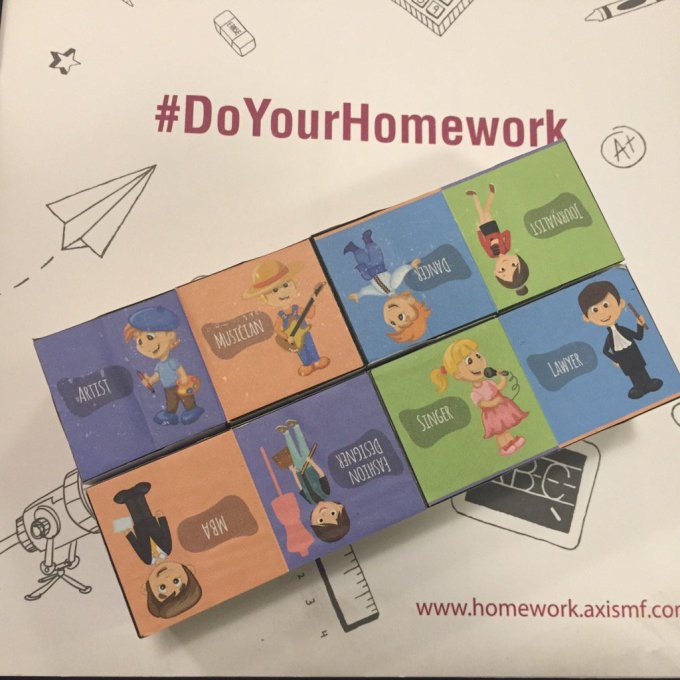 Education system in India is still in the developing stages, we might be aware that Education in the rural parts of India has not reached its potential, there are many struggles and reaching out to them in the remote areas is a task that Government is taking up steadily, however the pace is slow and not effective considering the infrastructure, teaching quality and hygiene is concern. Thou there are many NGO’s working on this system to be more effective so that the rural parts get their share of fair Education and infrastructure, but even they are tied up when it comes to getting the necessary funds required to furnish these basic needs, as per Article 21-A of the Constitution of India and its consequent legislation, the Right of Children to Free and Compulsory Education (RTE) Act, 2009 became operative in the country on 1st April 2010 and this has lead to promising future for Education in the rural parts of India.

If we look at the ASER (ANNUAL STATUS OF EDUCATION REPORT) report of 2014, there are statistics which shows that only 75% of schools have provision for drinking water, however how clean the water is for consumption is a broad question, some other interesting finding from the report states that usable toilets for boys are only 65% for boys and 55.7% for girls. If we talk about playground in these schools, you would be surprised to know that only 65.3% of them have space for playgrounds, which clearly shows that there is a definite need for improvement in these grey areas of schooling for kids in the rural areas.

** Note (The data of ASER ( ANNUAL STATUS OF EDUCATION REPORT) report of 2014 was conducted all around India from 577 rural districts – 30 randomly selected villages in each district -20 randomly selected households per village – All children age 3 to 16 in the household.

The other major concern due to lack of basic amenities like clean water, hygiene, proper toilets for girl child specially is the drop outs rates are accelerating  significantly and there are less enrollments in these Govt run schools, as the stats shows a dip from 6.95% (2013-14) to 14.77% (2014-15)

Talking about the need for some action to be taken for revamp of schools in rural India, Support my School a programme run by Coca-Cola India & NDTV in association with the UN-Habitat, Charities Aid Foundation (CAF) aims to revitalize 1,000 schools in the country, the program undertakes the following core activities:

With such necessary amenities in place, schools are able to provide a cleaner and healthier environment more conducive to learning.

Support My School is a WASH (Water, Sanitation and Hygiene) initiative that aims to improve basic amenities in government schools like separate toilets for boys and girls and access to water. The Campaign is also committed to developing the overall infrastructure like playground and a clean environment to encourage a holistic learning environment. The Schools revitalized under the campaign have served as model schools in several districts and have led to enhanced community engagement and higher emphasis on attendance and enrollment.

You can also join hands and support in this cause along with NDTV MISSION 1000.

The land of the Vedas as we call it doesn’t even have a literacy rate that it can proudly show upon, Yes India in the 21st century is still battling this war of illiteracy, we are amongst the top nations when it comes to higher illiteracy rates, thou we thrive to call our self’s the nation that gives most promising and prominent leaders but there is other side to this coin when it comes education. Thou the urban India is quite good in its literacy stats, but what about the rural areas, where reaching seems tough and understanding the right to education is still a challenge within the community, their mindset is what needs to be changed.

Education and literacy can bring down many issues that India faces like communism, terrorism and under development. Education can enlighten people through thinking rationally, be mature at making decisions, better understanding the rights, duties and responsibility of being a citizen.

Varanasi the cultural hub of India sadly is not that rich in its literacy level and education, children are drawn towards doing petty jobs, not realizing what the future holds and how they will make a life without no basic knowledge and proper education; this is prone to happen as education mechanism is not revived and there is a clear lack of proper infrastructure to facilitate and initiate educational establishments.

Focusing on Varanasi and talking about a concept to provide education to those individuals who struggle to meet ends and survive with just penny full in hand to make a living, I am talking about a unique BOAT school project by a true doer Ajeet Singh in Varanasi, a initiative to revive and make learning for them a fun place, this is not only helping these children learn but it is also keeping them away from streets and gettos which leads nowhere!

Thou this Varanasi boat school is just in its initial stage, it still needs a lots of modifications to truly get that magical transformation by creating a better and more viable place for these children to nurture their dream of proper basic education.

Many from us are blessed and have a good independent life, we live and earn to better out life and sometimes we do philanthropic acts to balance things and show our help in whatever we can manage.

Now is the time to rise up, do what we can and help make this Varanasi boat school a much better place, so let’s pledge to help them achieve their goal and contribute in this very thought provoking idea of a boat school, I believe this form of donation is not only a contribution but also a motivation in your surrounding when you talk and discuss on such initiative, your contributing is as good as 5 others if you spread the word. So be the Robin-hood of your surrounding and help in this unique and one of a kind initiative.

You can contribute by clicking on the link here at : Varanasi boat school

What began as a project helmed by Larry Page and Sergey Brin, two Stanford University graduate students.The program is currently one of the most influential in the World Wide Web: Google. First, the target students werer to make an effective search engine, allowing users to provide relevant links  in response to search queries. While the main objective, which remains today on Google, the company provides services ranging from e-mail and documents software for storage performance and mobile telephony operating systems. Less than a decade, Google has become a two-person company in several billion dollars society. Today, the popularity of Google continues to grow. In 2007, Microsoft also exceeded the most visited site on the Internet. All webmasters who want their site on the top list of  Google’s search results pages (SERPS) the more traffic in respective web site the better and the popular it gets. Google also acquired other Internet companies, ranging from service blogs Video website YouTube. Over time, the company
search technology from competitors, including the authority to search
engines – Yahoo! was based on a Google search on the e-mail four years to develop its own search engine technology in 2004.Google influence, not only on the Internet. In 2007, the leaders announced their intention to
in the FCC auction of wireless spectrum 700 megahertz (MHz) band. As part of the wireless network analog spectrum previously owned by television broadcasters.”Google said that the representatives of The Company entered the auction to promote competition in wireless industry. Google supports the approach to wireless technologies that consumers can use this device with a supplier, rather than faced with limited contact and preferred suppliers. To participate in the auction, Google had to demonstrate its readiness to respond to Reserve price range at 4.6 million dollars. Ultimately, Google does not win the auction. However, the company achieved its primary objective – Verizon, which won the tender, should follow the approach in the Google technology would be open.